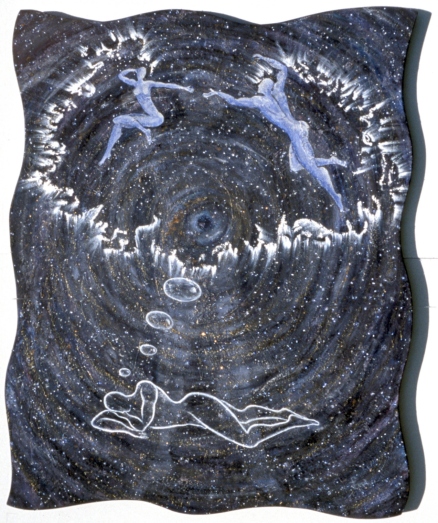 After months and months of hard, brain-wracking work I thought I was done. Yay! I shouted, bring on the bubbly! A whole year’s worth of blood-sweat and yes, a few tears, now completed. Oh how I was enjoying celebrating, doing things I’d denied myself for quite some time, all in the spirit of having done as good a job as I thought I possibly could.

Until, that is, I got another person’s perspective. Or, in this case, two, then three other persons’ worth.

What had been in my estimation a job well done, a fait accompli, turned out to be … well, a good start. Put it that way. A rough draft of a book that is lurking between the shadows of what I meant to say, and what I actually did. But a rough draft is at least something more than what I had before I’d begun. The bubblies persist, and I congratulate myself I’ve arrived this far. A lot of work, exhausting hours, many sacrifices – yet nowhere near finished, my dear. I’m talking to myself a lot these days, friends.

Of course for those of you following Lord Flea you’ll know what I’m talking about. The book I’ve been writing for the better part of this last year started off being called “Family Bliss NOW” then evolved into “Global Bliss Now” until — until the pretty recent day when I was fortunate enough to have an editor of a publishing company, a very esteemed publisher, take a look at it. I found this particular publisher by a fluke, an offhand referral by an old friend that brought us in contact because, after all, I had given up soliciting agents and publishers some years ago, having had more than my share of rejections.

“We like the premise, teZa” I was told right off. “But” (ahhh, the great but) your book needs clarification. When you get it more polished please be sure to show it to us again.”

I wasn’t so much disappointed as terrifically encouraged. Considered quite a feat it is, to have a publisher tell you they want to take a second look at a book. Usually you have only one chance. Obviously I was on to something. Trouble was, I really didn’t know how to “clarify” the writing anymore than I’d already done, having worked on it until I was quite sick of it. Sometimes a writer can only do so much before words, and ideas behind those words, start to swim in front of one’s eyes.

So I asked the publisher’s advice. “Well, now that you ask …” and he gave me very definite points that he felt needed to be attended to. Great! With this information in hand, I could take the next step. After giving myself a few days of down-in-the-dumpsville because my book had not been the great and completed masterpiece I thought it was (ahhh, the ego of the artist/writer, will we ever learn?) I now decided to … no, not set out to fix it myself. I’d already tried that. And look where I was, anyway. Being given clear instructions about what was wrong along with what I had to do next. And remember, words were swimming before mine eyes, ideas had turned to mush. I needed a break. or at least a Caribbean vaca.

“Get an editor,” the publisher kindly told me. “I’ll do my best to help you find one that will be a good match for your style and genre.”

After much soul-searching I have decided to work with what I’m calling my “book mentor” instead of calling her “my editor.” Of course she is an editor, and a damn fine one from what I researched. But more than that, this writer/editor has already given me enough inspiration to refill my sails. Her vivid insights into my project have set me back on the track of my original intention for writing this book: to share my experiences, good and bad, of raising Carter’s (my paramour’s) two kids. To show how my life expanded, and hopefully all the rest of my family’s did as well. And to perhaps help all the folks out there these days who have step-families, what are now more appropriately called blended families.

And so I am rolling up my shirtsleeves for another round of all day and many midnight-to-dawn efforts, digging back into what I thought was going to be a quickly written offering so I can get back to the three novels I’ve already written and are tucked away, incubating, anxiously awaiting mommy’s riveted attention. My attention.

For this endeavor of rewriting my book (yes, I’m completely re-writing it, as in RE-writing, not editing, my friends) I’m trying on new titles. Tell me which you like of these?

Hold That Thought: how one woman discovered her self raising others

From She Pirate to Angel Mom: transformation via my blended family

The Alchemy of Transformation: a personal journey of nurturing a blended family

Thanks for your support! I’ll keep you all posted about the developments of this daunting task, that I’m looking forward to because … I already have a First Draft! Lucky Me!

How’re ya holdin’ up? We’re getting ready for Ian here in Florida. #keepittogether #manifestingmagic #calmbeforethestorm bas-relief sculpture by teZa: plaster and paint on board tezalord.com galleries
My beloved Carter’s ready to operate. Thanks for the #firstaidkit @docvi13 Excited to be heading to #Bolivia with our last minute #yellowfever vaccine that we had to travel hours to get this morning #whowouldhavethought #ᴠaccinesaveslives
Where’s it all leading? #staytuned #bigthingscoming #holdyourbreath #drumroll
#homesweethome
Oh yeaaaah, getting stronger everyday. Pretty soon my self-defined “broke-leg” yoga will be up to the #goddessKali within, here demonstrated in #forestbathing #goddessasana before busted femur. #aintlifegrand #yogaeveryblessedday see my FREE #chakrayoga series on my YouTube channel (and #meditative #MindStillers) ✅link in bio 💜🙏🤸🏽‍♂️
gawd almighty I love this #sacredspiral cuz it’s my fav #motif 🔮🧿🌀🌀🌀🧿🔮#earthart #robertsmithson #spiraljetty
Since neck fusion I don’t do headstands anymore without a special “device” and have learned to adapt. This is yoga: #flexibility #acceptance #strength #resiliency #bodymindspirit #yogaeveryblessedday
Brunfelsia americana, one of illustrious members of the #solanaceae I was privileged to draw for botanists. Check out my art galleries at tezalord.com #yesterdaytodaytomorrow is its common name because the brilliant purple blossoms fade to dull violet, then white. #botanicalillustration #wondersofNature
#yogaeveryblessedday my life blossoms more fully everyday #breathawareness #bodymindspirit #weareone
Sexy gingers come in #allcolors❤️💛💚💙💜❤️️