17 years ago, I was attending Harvard’s Reunion with my husband (he’s class of ’68) that was held during the school’s regular commencement time in late spring. Among the guests of honor was Colin Powell, who at the time was Joint Chief of Staff, the official head of the US Military. To demonstrate the magnanimity of Harvard’s eclectic list of those included in that year’s graduation ceremony, Ravi Shankar (the diminutive East Indian musician) and Julia Childs (the towering French chef) were also to speak and receive honorary degrees. Just like its student body and professors, as always, Harvard symbolized the cream of our endeavors to reach the heights proffered by the “best” education. And this year, for some, that meant demonstrating against the “Don’t Ask Don’t Tell” policy that had just been made the official stand on homosexuals enlisting in the US Military by the then-Clinton administration. As alumni, we had been told that the graduating students of ’94 who were against the new “hush-hush status” — feeling this policy only kept a person’s right to be who they are even deeper in social denial — would stand and turn their backs when it was Colin Powell’s turn to address the sunshiny, happy crowd of graduates that glorious Spring morning. Anyone who intended to take place in the planned peaceful demonstration wore pink that day. Pink hats, dresses, blouses for the ladies, pink shirts for the men. A big pink ribbon on headboards along with commencement tassels or a pink stole draped on the shoulder for those graduates participating in the demonstration. 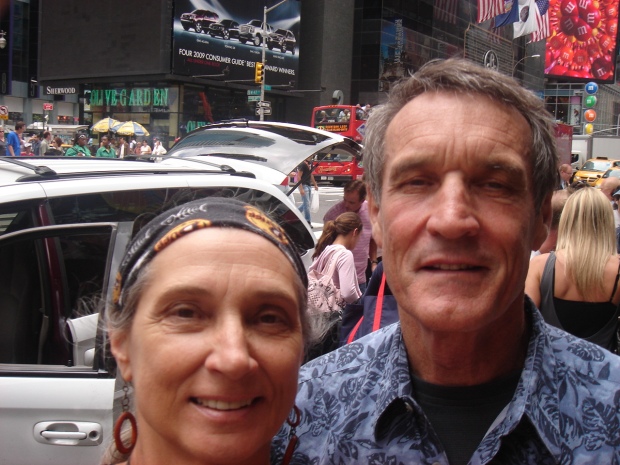 my consort, Carter and Lordflea

As you can see, Carter, my love and husband of twenty years, is a manly-kind of guy, not a “poof-ter” as some awkward-aged teens still call gays behind their backs. Carter’s mistake that day had been to wear a shirt that had a noticeable wide pink stripe in it, among the green and blue stripes. Yet that color alone marked him as “one of them!” creating, inadvertently, a bond with men and women who were being officially separated from others with this policy-of-denial, even though they were willing to lay their lives down to fight for the freedom of the United State. Engaged in a lively conversation with another of his classmates, Carter somehow drifted into the predetermined line of Colin Powell’s arrival just at the moment when he did arrive. Just then, in full regalia of stretch limo and several high-security Secret Service vehicles with a phalanx of men-in-black accompanying him, Carter was shoved out of the way by a local policeman who shouted to him, “Get a life, buddy!” because Carter had walked into the path being cleared for soon-to-be Secretary of State Powell’s arrival. No doubt, because he wore that pink-striped shirt had something to do with the rough interaction Carter received.

Clearly, the mood was apprehensive that day. Demonstrating at Harvard! This has been a centuries-long tradition going back to the earliest times of America’s fight for liberty, beginning with soon after severance from England, embracing women claiming the vote, blacks gaining equality, and students who shouted Out of Vietnam! when the entire library was taken over by demonstrators. However, when the time came for Colin Powell to give his speech to the graduating class of ’94, the demonstration was stunning in its peaceful message, with so many backs turned on the speaker, with pink ribbons waving in the wind. This act of nonacceptance reverberated loudly that sexual discrimination was inhuman, and was felt throughout the entire social matrix of our nation as the graduates that year went into their adult careers, in virtually all professions and capacities of life.

Yesterday, September 20, 2011, the US military passed a historic milestone with the repeal of the ban on gays serving openly in uniform, ending a prohibition that President Barack Obama said had forced gay and lesbian service members to “lie about who they are.”

Gene and Nat at their Harvard Mem Hall wedding

As a family of man, we are, indeed, starting to grow up. The tender steps we take toward our full potential are often difficult, clumsy, and rife with mistaken steps, stupidity and upheavals, adjustments, and way too much violence and political oppression. But surely, truly, indeed, we are growing into our full humanity, little by little. Our journey to the full spiritualization of humankind is a fact. We are all participating in this global awakening, whether we know it or not! Today is a day for celebration! Grab someone you love and give them a kiss and a hug, tell them how great they are, and how happy you are to be alive to know them! I love you all, truly!

With light and love galore, lordflea

Happy Sunday🌻a rainy Funday 🐌The other day some stranger dm’d me: are you all right, you look tired! Ha! I’ve been diggin ditches,literally, creating drainage runways n new gardens galore. Nothing like hard back-muscle work to perk a gal up, right? The new teZ Mahal #outdoorart studio I’m creating has #raisedbedgardens for vegetables, stone paths lined w/blueberries (thanks, mimi!), papayas and avocado trees grown by me from seed, a 300-yr #palmetto (on this spot since the Civil War!) big pines-shaded #sculpturegarden w/wall for displaying #ZLORD #visionarypainting💜Now that’s a pretty #bigWOW so yes, I’m #pooped
Are you a We or an I Kind of Person? ✅link in bio for ZLORD #spiritualpodcast #blendedfamilylove
#handstandeveryday #inversionjunkie #visionaryartist I am lifelong #yogini #strongwomen #strongyogis unite! We are #changingtheworld #om #loveyourself
Filming #documentary about women of #FortMose the first #freeblack settlement in USA located in #staugustineflorida I am #artDirector #blackwomenmatter #blackhistoryfacts
1- #onedayatatime #1 of 56 cells from the #Oneness grid. I am #visionaryartist
I love #science and #spirituality both. These #darkphotography #deepwater hatchlings featured this week in @nytimes
NEW episode on ZLORD #spiritualpodcast ✅ in bio “The Re-Birthing of Ourselves” #herdimmunity #expandyourmind #antivax #savelives
Help save lives! Get the vaccine! In Florida every adult over 18 is eligible April 5. This world is a #BlendedFamilyLife so Plez get over your prejudice and stop being against #herdimmunity which your ARE if you are against the vax. #awaken to the #higherGood #SpreadTheWord thanks🧡💜💚💛💗💛💚💜🧡
NEW EPISODE on ZLORD #spiritualpodcast Looking for Signs, Making #Ghee, Doing #Yoga ✅link in bio
Ditch digging! Sculpting drainage swales is my latest #creativeoutlet #earthmoving #earthart #ecoartist
Plez tell me I’m not the only one who’d be creeped out sleeping at a place called “the Clown Motel”—yowsie! That’s my lover boy Carter on the road with a man called Horse #malebonding #clownworld #clownlife