storm haiku ... the ominous atmosphere of the approaching storm

today we woke in st. augustine thinking perhaps we’d be struck by hurricane fay  sometime later today. fey, she’s being called also, which is ironic, as “fe” (pronounced fay) means “faith” in spanish. right now, at 1pm. she’s been downgraded back to a tropical storm, and we’re beginning to relax a little. the beaches are already in danger of erosion. i’ve just returned from there, and the sea foam is still sticking to my feet.

the atlantic coming onto the road at st. augustine beach 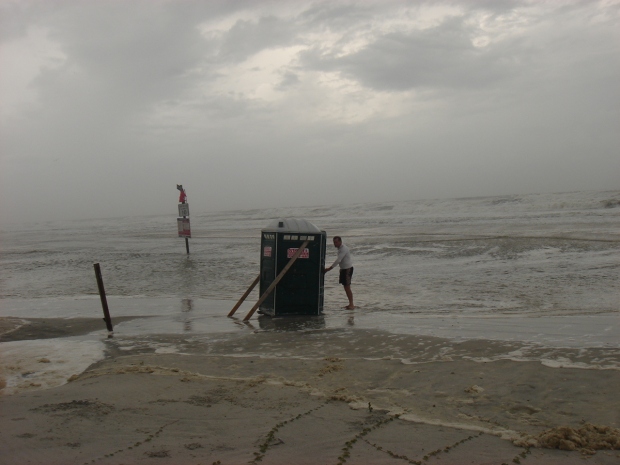 one last stand on the beach

whipped cream-like sea foam so thick it sticks to your ankles!

for me, who has gone through many eyes of hurricanes (being a tropical-loving sailor, among other things), i know that each storm that arrives anywhere near where i live is an unpredictable organism, likely to surprise the hell out of us humans at any second.

and…like the storms that brew in our own emotional lives (either from our own making, or from others’ or life’s actions upon us) … we can learn to sink softly in the comfort of going through each storm that hits us. how? by first of all, being prepared. and secondly, by relaxing, and not sensationalizing these completely natural events of life, but deadly nonetheless, whether hurricanes, tornadoes, cyclones (in the Pacific) or any other type of Nature’s severe weather. or…our own unsettled inner selves.

here’s how i’ve learned to do it:

being prepared is the key. doing whatever we must do to make sure we’re in good shape to face any storm, whether internally or externally. and, once you’ve done your work (which sometimes takes a lot of effort, demanding years of processing, but it gets easier the more you practice), then the trick of being happy through any storm is — to totally let go.

in ’04 i went through 4 (count ’em, four!!) eyes of hurricanes. that summer i was teaching incarcerated girls in a central flordia lockup. we went through the eye of hurricane charlie together. of course it scared the living crap out of the girls…but…afterwards, after they’d experienced the uncanny calm in the center of the fierce winds and devastating energy…they could understand in a very personal way the common metaphor used to teach the power of meditation. and that is…

within all of us is a center of peace. no storm, no atrocity, no dis-ease can rock us from our center once we’ve learned to tap that inner power, and keep it close to our heart.

the girls in lockup (there for repeat crimes like drug use, stealing, even attempted murder) experienced the heart-stopping horror of being directly in charlie’s eye: three hours of hell, then half an hour of the eerie calm in the center, then another three hours of hell with winds coming from the opposite direction. the girls huddled together in the dark humid heat, with nothing to cling to but each other. thank god the roof stayed on, because their facility was pretty ancient. when we next met for yoga class and it was time to meditate, called the “dead-person’s pose,” or savasana that all good yoga classes end  with, after practicing yoga’s rigorous poses (asanas), they could understand perhaps for the first time what i meant when i said:

go within, reach that place of inner calm that all humans have. and … just like each hurricane revolves fiercely on its center, it’s still-point, we too have a center of calm within us. that is the law of Nature. learn to stay in that place, the inner calm, whenever you need to. don’t allow yourself to be frightened. never let the swirling winds on the outskirts of your center pull you in. stay in the center of your own power. own your own power, not someone or something else’s.

keep safe, my friend! stay in the Light, sing the song of Oneness, lord flea